The President visits Chattanooga today to continue to promote his job-creation campaign. But Amazon? Really? Why is President Obama using Amazon to tout his ideas for job creation?

Today in Chattanooga the President visits an Amazon warehouse to propose a "grand bargain for middle-class jobs." (This is written before the proposal, details on that later...) A Chattanooga newspaper, the Times Free Press, responded to the President's visit by reiterating the basic Republican position, calling job-creation, minimum wages and taxes on the wealthy "socialism." The editorial, titled Take your jobs plan and shove it, Mr. President begins,

"Welcome to Chattanooga, one of hundreds of cities throughout this great nation struggling to succeed in spite of your foolish policies that limit job creation, stifle economic growth and suffocate the entrepreneurial spirit.

Forgive us if you are not greeted with the same level of Southern hospitality that our area usually bestows on its distinguished guests. You see, we understand you are in town to share your umpteenth different job creation plan during your time in office. If it works as well as your other job creation programs, then thanks, but no thanks. We’d prefer you keep it to yourself.

That’s because your jobs creation plans so far have included a ridiculous government spending spree and punitive tax increase on job creators that were passed, as well as a minimum wage increase that, thankfully, was not.

The editorial goes on like this. By the way, here are the results of the President's "ridiculous spending spree": The red lines on the left -- where the lines are going further down every month -- were the period when President Bush was in office. In the first months of the Obama Presidency the economy was losing more than 800,000 jobs per month. Then the "ridiculous spending spree" stimulus kicks in and the lines start moving back up again. The point of that dramatic 'V' is the point where the stimulus kicks in. Those are the blue lines that go up until the economy is gaining jobs again. But then the stimulus winds down, the Republicans obstruct any further stimulus, and things stagnate.

And here are the results of what the paper calls a "punitive tax increases on job creators." The deficit is already down 50% from where Bush left things: 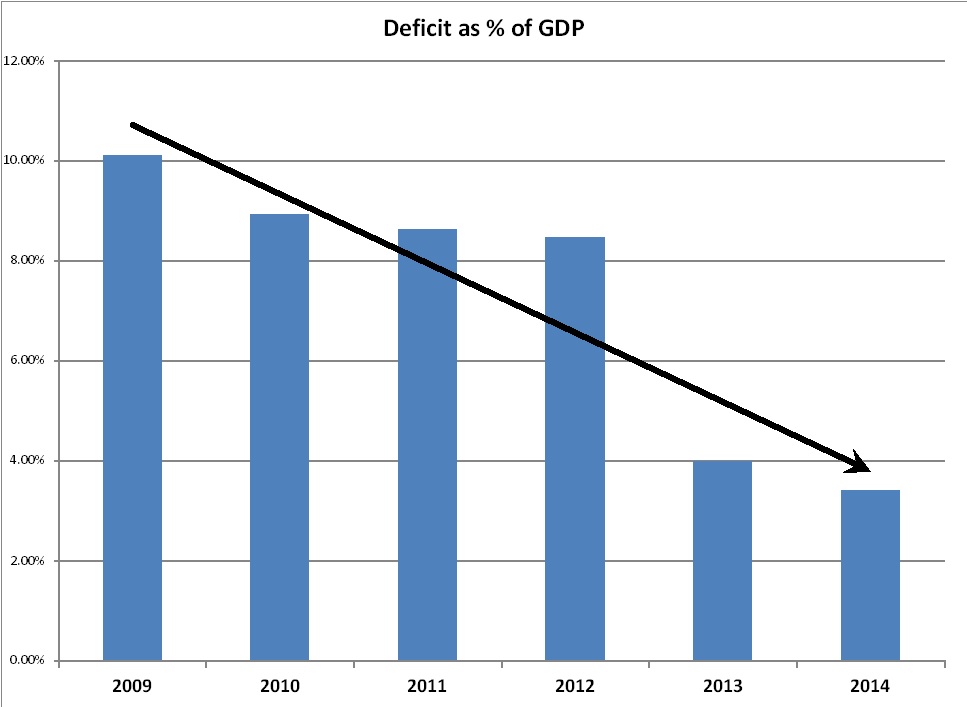 The President is in Chatanooga visiting an Amazon warehouse. Amazon in the past earned a bad reputation for hiring temp workers to work under speeded-up conditions in warehouses where temperatures can reach up past the 90s. A Seattle Times story from 2012, Amazon warehouse jobs push workers to the physical limit, details some of the complaints. But Amazon says they have improved these conditions, and has been spending to bring standards up to "industry benchmarks."

Also, of course, Obama's embrace of Amazon dismays many booksellers.

To coincide with the President's visit Amazon announced a plan to hire as many as 7,000 new employees.

Amazon says these new jobs will be full-time and full-benefi. The company has promised to pay 30% above traditional retail jobs and says the jobs will come with stock grants that have been boosting Amazon employee pay by an average of 9%, and the jobs include 95% tuition reimbursement for those attending college. Also the jobs represent a 25% staffing boost, which could lower the work pace for existing employees.

Amazon was one of the corporate funers of the notorious American Legislative Exchange Council (ALEC) until they were exposed. Under pressure they announced they were dropping funding of ALEC, at least temporarily. I was in the room for Amazon's announcement that they are dropping ALEC, and wrote about this in At Shareholder Meeting Amazon Drops ALEC Dodges Tax Questions,

At one point in the meeting attendees at the meeting were able to ask questions, and a question about Amazon’s funding of the shadowy right-wing American Legislative Exchange Council (ALEC) was answered with the announcement that Amazon is dropping their support of the organization “for this year.” The company’s corporate-speak wording was approximately thus: “We regularly evaluate our memberships in different organizations and we have determined that we will not renew our support of ALEC for this year.”

On a call this morning Gene Sperling explained why Amazon is a good example of job-creation. The following is from a transcript:

"Q) I guess my question is for Jen. In the press release, you say it’s an opportunity for a good job that pays good wages. And then, today, of course, the President is speaking at Amazon. Are the jobs that Amazon is talking about today -- 5,000 new jobs at $11 an hour, which is below the poverty level -- is that the kind of jobs the President really wants to create?

MR. SPERLING: We probably had more full-time job creation in this recovery than in some of the previous recoveries. And this President has a robust economic growth package, which is designed to create well-paying middle-class jobs.

But we should not denigrate any job or any work. People work at different jobs throughout their lives; families piece together sometimes two incomes to have a degree of middle-class security. So we need -- we have our plan. The President is focused on things like manufacturing innovation; on having a community college career -- community college-to-career initiative to make sure people are getting trained to meet the high-skilled jobs that pay higher wages; the infrastructure, which is important for making the United States an attractive place to locate, All of that is designed to bring forward the strong, high-paying middle-class jobs.

But that does not mean -- but we should be encouraging job creation across the board. A lot of people need to work. There is dignity in all work, and we want as strong a job creation as possible. And that’s why the President wants a pro-growth fiscal policy, not one that’s hurting jobs, like the sequester does right now. And the President wants to have a pro-growth, pro-jobs grand bargain in areas like making our tax code more attractive for location of strong jobs in the United States. And the reason he supports things like the manufacturing innovation institutes is exactly to attract the type of higher wage manufacturing and services jobs that are part of our economic future. "